The EHP provides active heating and cooling of parallel plate and cone and plate geometries. With standard and disposable systems it is ideal for rheological characterization of polymer melts and thermosetting materials up to a maximum temperature of 400 °C. The optional Gas Cooling Accessory extends the minimum temperature to -70 °C. Standard features include 25 mm diameter parallel plate geometry, environmental cover, and heated purge gas. An optional clear cover is available for sample viewing and for use with the Camera Viewer option. The EHP offers Active Temperature Control (ATC) making it the only electrically heated plate system capable of direct temperature control of the upper and lower plates (See ATC Section for more details on this exciting technology). The upper EHP can be used with lower Peltier Plates for temperature control to 200 °C and as temperature control to 150 °C for UV curing options. 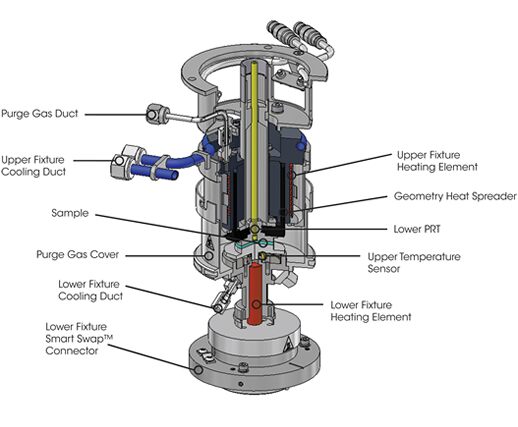 The EHP lower assembly incorporates a cartridge-heater and cooling channel directly below the lower plate. A Platinum Resistance Thermometer (PRT) is positioned at the center and is in contact with the opposite face of the lower plate, providing intimate measurement and control of the sample temperature. In the upper assembly, a cylindrical heat transfer unit, with an integrated electric heater and a liquid/gas cooling channel, surrounds the cylindrical heat spreader geometry. These two components are in very close proximity, but do not contact, enabling efficient heat transfer and unimpeded torque measurement. Unlike competitive designs, the heat transfer unit and the geometry heat spreader remain in constant spatial relation to one another regardless of the test gap, keeping heat transfer uniform at all times. A unique calibration matches upper and lower plate temperatures at all heating rates, ensuring uniform sample heating at both sides – virtually eliminating the need for thermal equilibrium time and enabling true temperature ramp programming. Patented Active Temperature Control (ATC) eliminates the need for upper heater offset calibrations by providing actual measurement and control of the upper plate temperature. See ATC technology section for more details. A heated purge and cover create an oxygen-free environment around the sample to inhibit sample degradation. 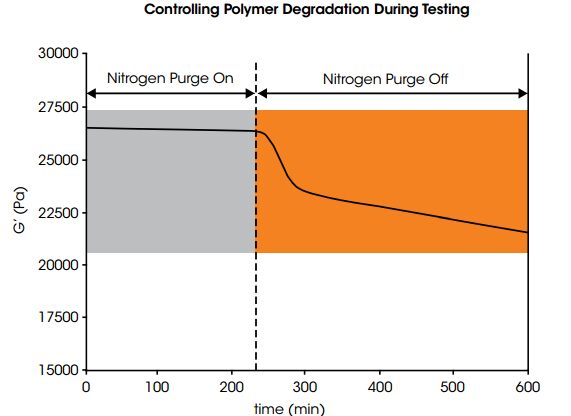 Viscoelastic properties of polymer melts can be affected by thermal and oxidative degradation at elevated temperatures. It is important to measure rheological properties in the absence of degradation, as well as evaluating the effectiveness of stabilizing additives such as antioxidants. This figure shows how effectively the EHP controls the environment for commercial polystyrene melt during a 10-hour time sweep experiment at 200 °C. The storage modulus, G’, can be seen to be very stable during the early stages of the test when the sample is purged with nitrogen. The data demonstrate the environment in the EHP is virtually oxygen-free. After about 4 hours, the inert gas is shut off and the effect of presence of oxygen on the viscoelastic response is seen immediately. The polystyrene degrades as evidenced by the sharp decrease in G’.