TA Instruments invites you to experience the world’s finest line of Differential Scanning Calorimeters, the Discovery DSC 2500, DSC 250 and DSC 25. Discover the advanced engineering and attention to detail that provides enhancements in every aspect of DSC technology and a new level of user experience.
From the most cost-effective DSC with industry-leading performance, to the most advanced DSC available, there is a Discovery DSC to meet your needs and exceed your expectations.

Once again, TA Instruments has set the bar in the science of DSC. TA remains as the only DSC supplier to ensure the utmost in data integrity through thoughtful and innovative design. Best-in-class performance is realized without the need for pre- and post-test data manipulation prevalent in competitive offerings. The new Discovery DSC provides both novice and advanced DSC users the highest confidence in generating superior data, while enhancing laboratory workflows and productivity.

Choosing the BEST DSC for YOUR NEEDS 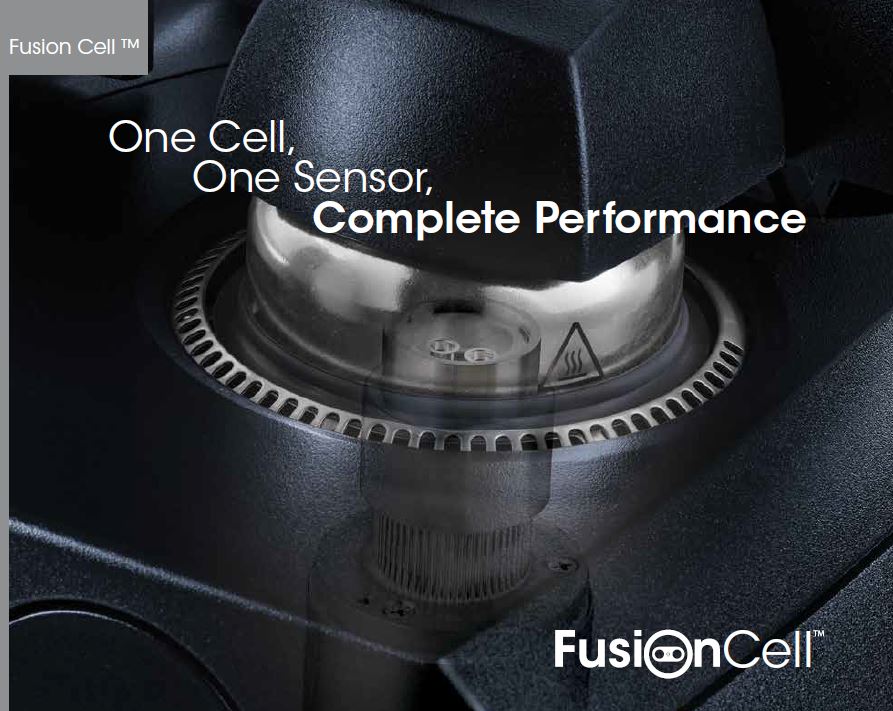 At the core of every Discovery DSC is the NEW TA Fusion Cell™, which incorporates design concepts that “FUSE” together the best features of the world’s bestselling Q-Series and first generation Discovery DSC, patented Tzero® technology, and new proprietary manufacturing processes. Unlike competitive designs, the Discovery DSC delivers optimum performance with a single sensor, eliminating the need to exchange sensors to optimize a specific performance aspect. The result is an innovative new DSC with unrivaled performance in baseline flatness, sensitivity, resolution, and reproducibility.

Traditionally, DSC heat flow measurements have been based on the same principle that ASSUMES contributions by the sample and reference sensor to the total measured heat flow simply cancel each other out. If this assumption was true, all DSC’s would have perfectly flat baselines. In reality, they do not. The fact is that each sensor’s resistance and capacitance (ability to store energy) produce imbalances in the heat flow, resulting in deviations from baseline flatness and impaired resolution and sensitivity. ONLY TA Instruments, with patented Tzero Technology, can measure this imbalance. Tzero Technology eliminates complicated pre- and post-test manipulations, such as baseline subtraction, deconvolution or other mathematical treatments competitive designs must use to improve baseline performance, sensitivity and resolution.

Patented Tzero Technology measures the resistance and capacitance of the sensors and utilizes these values in the four-term heat flow equation to give the most accurate real-time determination of heat flow available on any DSC. TA engineers have taken this one step further by also including the contributions of the DSC pans. This Advanced Tzero technology, T4P heat flow, provides the sharpest resolution, the highest sensitivity and allows for the measurement of heat capacity in a single run! In patented TA MDSC®*, a sinusoidal temperature oscillation is overlaid on the traditional linear ramp. The net effect is that heat flow can be measured simultaneously with, and independently of, changes in heat capacity. The Total Heat Flow signal contains the sum of all thermal transitions, just as in standard DSC. The Reversing Heat Flow contains glass transition and melting transitions, while the Nonreversing Heat Flow contains kinetic events like curing, volatilization, melting, and decomposition. TA invented MDSC and understands it like no other company. Modulated DSC is standard on EVERY Discovery DSC model.

Benefits of MDSC include: 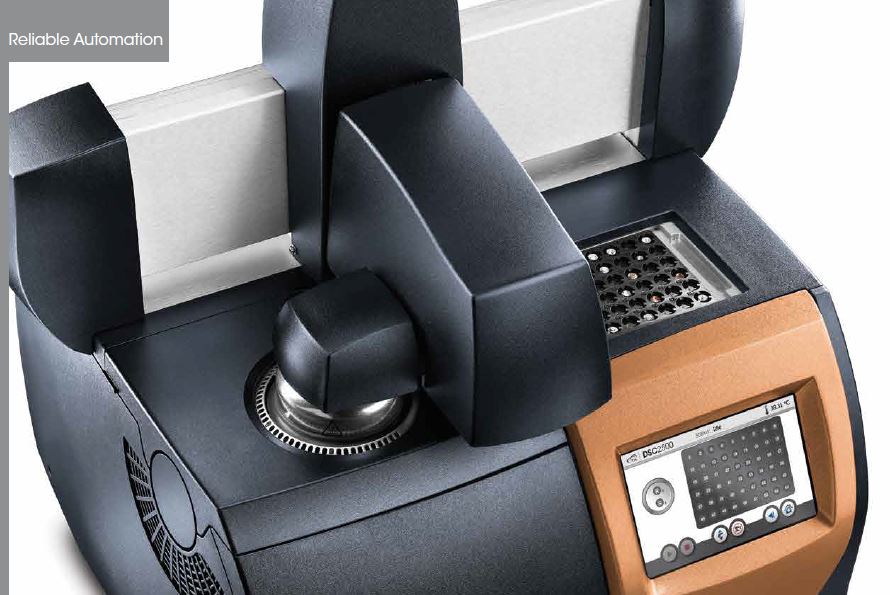 It’s hard to believe we could improve on the most reliable DSC autosampler on the market, but we did! The new linear autosampler was designed to be even more rugged and simple to use than ever before, while offering maximum in testing flexibility. All Discovery DSC’s feature the innovative “app-style” touch screen. This makes operation easier than ever, with enhanced One-Touch-Away™ functionality. As easy as operating a tablet or smart phone! 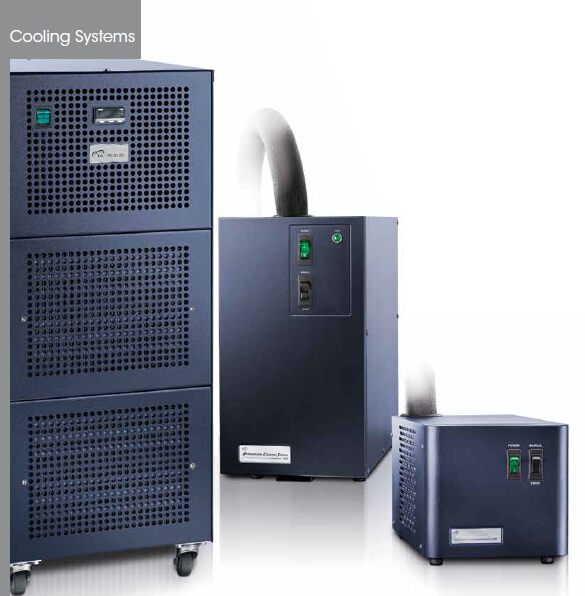 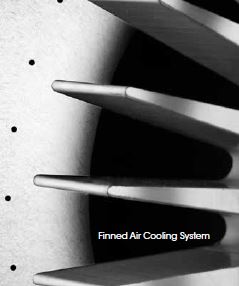 The FACS is an innovative cooling accessory that offers a cost-effective alternative to the RCS or LN2P cooling systems. The FACS can be used for controlled cooling experiments, thermal cycling studies, and to improve sample turnaround time. Stable baselines and linear heating and cooling rates can be achieved between ambient and 725°C. 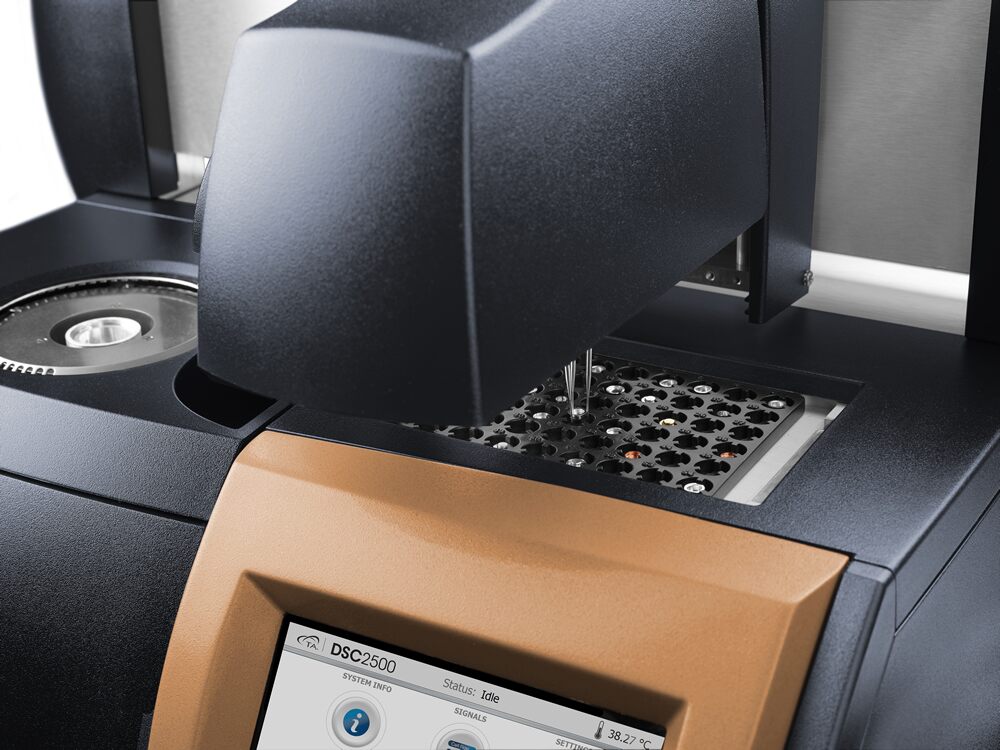 The DSC 25 and DSC 250 non-Auto systems can be field retrofitted to the 54-position autosampler. 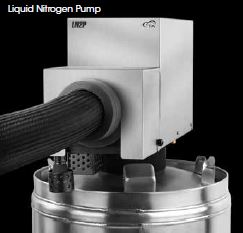 The LN2P provides the highest performance and greatest flexibility in cooling for the Discovery DSC. It facilitates the lowest operational temperature (to -180 °C), greatest cooling rate capacity (to 140 °C/min), fastest sub-ambient equilibration times, and an upper temperature limit of 550 °C. Operating at ambient pressure, the LN2P uses liquid nitrogen efficiently, thus reducing operating costs. It includes a 50-liter Dewar with auto-fill capability which allows the LN2P to be automatically refilled from a larger source, even during a DSC experiment, for continuous DSC operation with no disruption.

Proper sample preparation is of critical importance to the quality of data generated on a DSC. The Tzero sample encapsulation press and pans take into consideration every detail necessary by design to ensure simple and proper preparation for the highest data quality.

Tzero high-performance pans and lids are designed to maximize pan flatness and sample contact. Coupled with the unparalleled flatness and uniformity of the Fusion cell sensor, the Tzero pans and lids provide the most direct, uniform heat flow path from the sample to the sensor. These pans are tolerant of many sample forms and are designed with lids that conform to the top of irregular specimens, efficiently transferring heat to and from the entire sample. Competitive pan designs that have non-flat bases are unable to achieve appropriate thermal contact with solid specimens. Fabricated using advanced technology and to extremely tight tooling specifications, the Tzero pans offer significant improvements in resolution and repeatability over any other pan design.

Tzero® DSC Sample Encapsulation Press
The Tzero press takes sample encapsulation to a higher level of performance and convenience in conventional and hermetic sealing of a wide variety of materials. The press kit includes four die sets for Tzero aluminum and hermetic pans & lids. Optional die sets are available for high-volume DSC pans and Discovery TGA sealed pans. The die sets are magnetically attached with no tools or adjustments required. In addition, each die set is color-coded to the box containing the compatible Tzero or standard aluminum hermetic pans and lids. 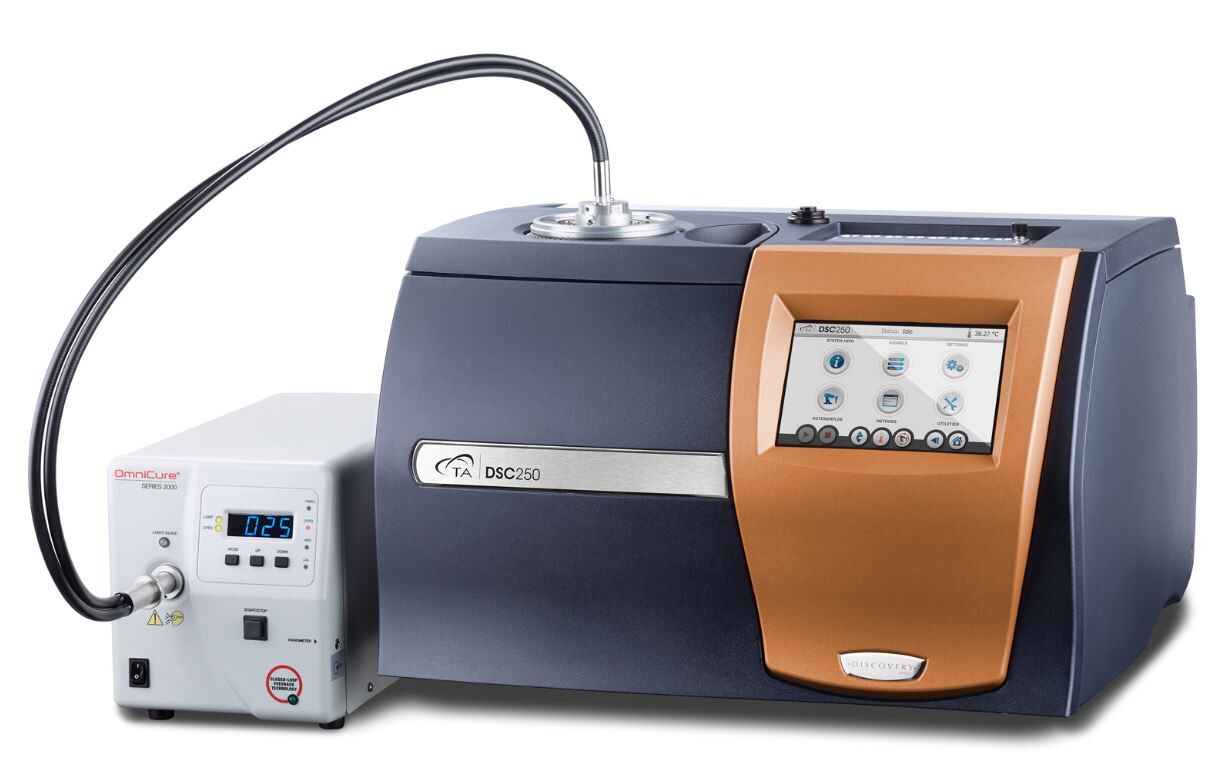 The Photocalorimeter Accessory (PCA) permits characterization of photocuring materials between -50 and 250°C. UV/Visible light (320-500 nm) from a 200 W high pressure mercury source is transmitted to the sample chamber via an extended range, dual-quartz light guide with neutral density or band pass filters. Tzero® technology permits direct and accurate measurement of light intensity at both the sample and reference positions without the need for an external radiometer. It also provides for simultaneous measurement of two samples. 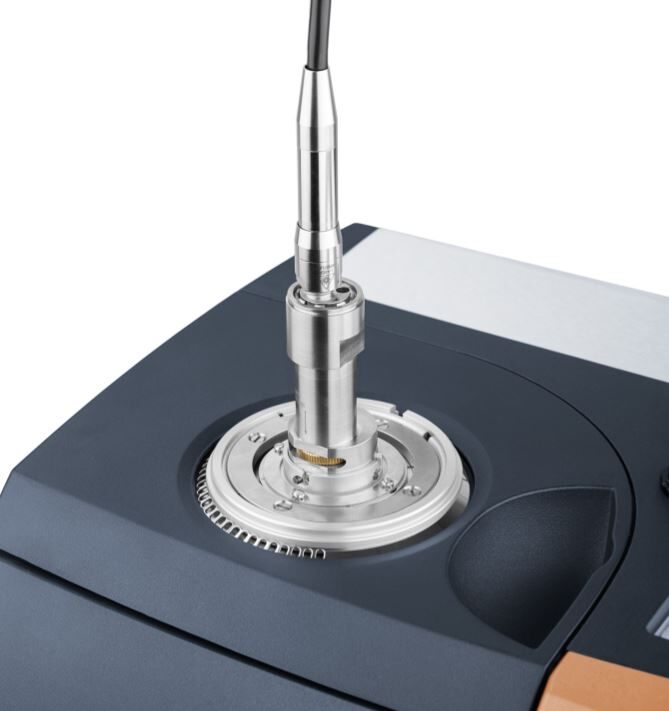 The Optical Accessory Kit provides the capabilities for measuring the calorimetric characteristics of a sample, such as heat flow and heat capacity, while simultaneously collecting information on the optical characteristics, such as Raman, Near-IR and visible changes in the sample. Such measurements can provide information on the chemical or structural changes that are occurring within a material that is complementary to the heat flow data collected by the DSC. A specially designed cell lid assembly allows for direct observation of the sample by the external optical probe while maintaining high-quality calorimetric performance. This flexible interface can be configured to work with many optical systems through the use of an appropriate probe adapter supplied by any 3rd-party vendor. DSC thermograms can sometimes be complicated and difficult to interpret. On many occasions, multiple DSC experiments must be performed to better understand a thermal event. The Discovery DSC Microscope Accessory allows the user to easily view the sample while performing a DSC experiment. This accessory aides in the identification of endothermic solid-solid phase transitions that may erroneously be interpreted as melting endotherms. Furthermore, the experimenter can now observe physical changes in a material as it undergoes phase transitions and volumetric dimensional changes, such as shrinkage, associated with a transition, evaporation or sublimation.

The Discovery DSC Microscope Accessory is a high resolution digital microscope camera which simultaneously captures images and video during a DSC experiment.

DSC performed with the microscope accessory has several applications that may prove insightful to better understanding materials’ properties and behaviors. It allows the scientist to capture images of: 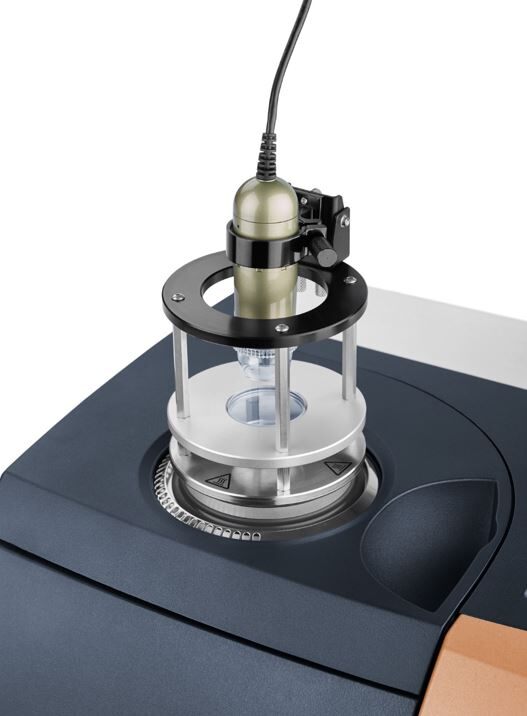 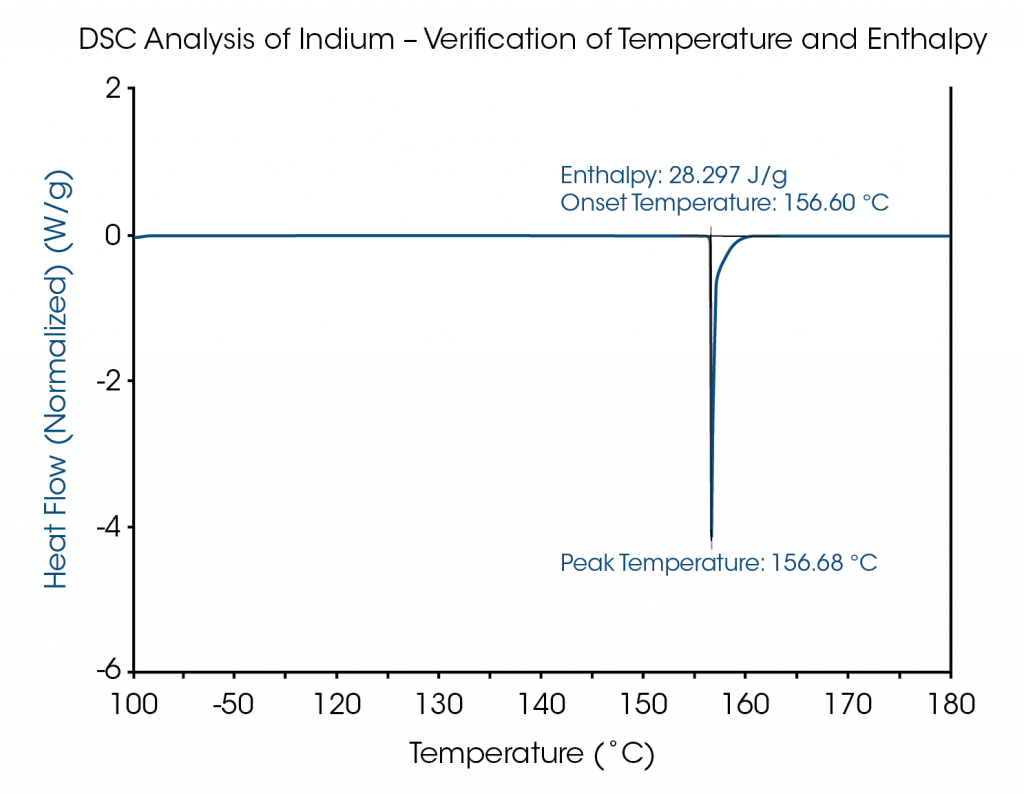